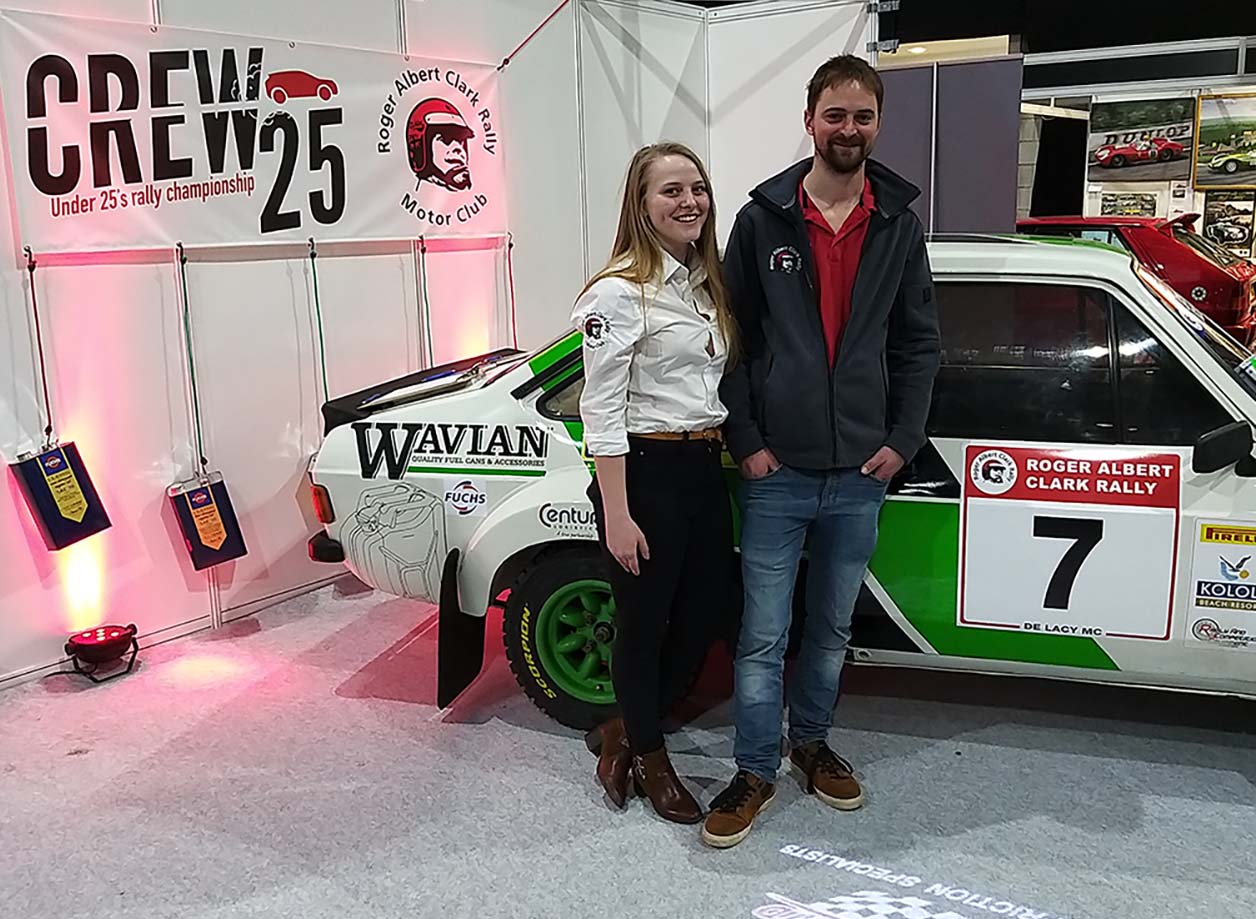 Unless you happen to be blessed with the talent and funds to compete at national, European or even world championship level, there are limited options for young people trying to find a route into rallying. Crew 25 championship coordinator Tiegen Lillicrap thinks that this gap needs addressing: “If you look at British rallying it is very much an older generation thing. We don’t have enough people coming into the sport at a young age.”

New for this season, Crew25 is designed to encourage the next generation of drivers and co-drivers into the sport, Tiegen says, “without it being something that your parents have to pay for or you have to have worked for years to earn enough." Making rallying affordable for young people (or at least as affordable as rallying can be) is one of the key principles underpinning the championship.

To ensure that any crew can win regardless of budget, the championship uses a points-based class system. “If you do well in your class, you’ll do well in the championship.” Crew25 has classes for cars up to 1000cc, 1400cc, 1600cc and an ‘open’ class that allows cars to be more heavily modified. However, they must still be two-wheel drive and not exceed 1600cc. With the exception of the ‘open’ class, the regulations are intended to keep “everything as standard as possible.” In addition to the mandatory safety equipment (roll cages, bucket seats, fire extinguishers etc.), permissible changes are limited to the suspension, brake pad or shoe material, air filter and exhaust system, while a limited-slip differential can also be fitted.

Lack of seat time in a rally car need not be a barrier to entering the Crew25 championship. “We’re fully aware that people at that age are probably going to have very limited experience,” says deputy championship coordinator Ross Lillicrap. With this in mind, crews who register for the championship have the opportunity to take part in a training day at Peter Gwynne Rally School. According to Tiegen, being affiliated to the Roger Albert Clark Motor Club also means that “we have a wealth of accessible knowledge” for crews to tap into. “If the championship becomes a stepping stone and crews go up and do other stuff after us, then I’m happy,” she says, “because it’s encouraging them into the sport and that’s what we have to do more of.”

There are a range of incentives on offer for crews participating in the championship. Starting from the second round, one crew will be picked at random on each event to receive £400 towards the cost of entry fees. “Suddenly that [money] makes it viable for a crew to go to the next round [and] all of a sudden they’ve done another rally that they probably would never have done,” says Ross. Similarly, a crew will be chosen at random after each event to receive a free set of tyres from championship sponsor Pirelli. And as well as tuition from Peter Gwynne Rally School, all crews will receive a free goodie bag from Fuchs Lubricants and enjoy trade discount from Questmead. For the overall winners of Crew25, there is a £500 cash prize.

As its name would suggest, one aspect of the championship that the organisers are keen to promote is working as a crew. That means drivers and co-drivers are encouraged to stick together throughout the season and, unlike some other junior championships, both crew members must be 25 or under to be in with a chance of winning the series overall. This helps develop the teamwork between driver and co-driver that is crucial to success in rallying, as Tiegen explains: “I have seen it happen time and time again where drivers change co-drivers so often and they don’t progress. You have to build a relationship where you trust your co-driver, and vice versa - it’s a partnership after all.”

Crew25’s inaugural season originally consisted of six events. However, the first round of the championship has been postponed and the second cancelled in response to the coronavirus pandemic. This follows the decision by Motorsport UK to suspend all organising permits until at least 30 April. At the time of writing, Crew25’s first event will now be the Red Kite Stages on 14 June, but “this is dependent on how the current situation develops. In terms of the championship we are monitoring the situation closely and seeing how things develop over the coming weeks.”

Of all the rallies in the calendar, perhaps the highlight is the Three Shires Stages, which currently is still going ahead on 6 September. The rally takes place on closed public roads across Worcestershire, Gloucestershire and Herefordshire. Tiegen says she was “eager to get a closed road event into the championship” and that Three Shires is the “perfect event to learn on.” Crews can also expect a “fantastic” atmosphere, thanks to the unique nature of closed-road rallies. Tiegen recalls her experience of last year’s Three Shires Stages and why it made the event’s inclusion in the championship a “no-brainer”: “We were on a flat-out straight and people were sat next to us in their gardens on sofas watching the stage… It had an atmosphere that was true to what I was trying to get from the championship, where it was about doing it for the love of rallying.”

Crew25 is not about trying to create the next generation of world championship rally drivers. Arguably, what the team are trying to achieve is even more important for the sport’s long-term future, especially at the grassroots level. As Tiegen puts it, “we’re trying to do rallying that’s actually accessible for those people who work a Monday to Friday job, who’ve saved their own money up to do it – we’re doing a championship for them.”